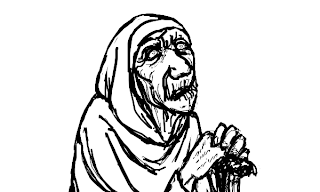 Sister Sonja is a human Zealot from Reikland. She has joined a party of intrepid adventurers after it was found out that most of the employees at her current place of residence were chaos cultists. She had always suspected them as shiftless no-gooders. During the purge of the locale, she was befriended by a dwarf named Stedd. She has committed to traveling with him on his encounters.

Sis Sonja is suspicious of pretty much all humans she meets. After a while in their presence, she can usually tell if they are lazy, gluttonous, greedy, lecherous, etc. She believes her purity and devotion to Sigmar will greatly enhance the dwarf's expeditions.

It is probably important to note that Sis Sonja is completely blind. A fever took her sight ten years ago.

*When choosing action cards, I removed not only all the wizard and priest cards but also all the ranged cards. I only chose from melee and support.
Characters RPG WarHammer