Showing posts from November, 2015
Show all

November 26, 2015
My PC Vaervenshyael  - Female Elf Duellist My companions Tankred "Silver Bear" Tenneckermann  - Human Veteran Wilhelm Hechland  - Human Engineer Doctor  Johann Wilhelm Woeller  - Human Physician ( Previous Notes ) The Princeps and the Master of the Horse requested that the party aid an associate, Helmut the Ranaldian by name, acquire the body of the dead Sigmarite priest from the Sigmarite temple so the priest of Morr might ask the body some questions. Vaervenshyael did not pay close attention to the details of speaking with a dead body, but Johann seemed most enthralled. The plan included Tankred taking his men to the front of the Sigmarite temple for a distraction. Vaervenshyael and Johann were to guard the back door while Helmut and his men went inside to take the body. They were charged with making sure nobody saw which way the body went when it came out the back. Wilhelm was positioned on a nearby roof, providing cover with a crossbow. After the Ranaldia
Read more

November 23, 2015
My PC Vaervenshyael  - Female Elf Duellist My companions Tankred "Silver Bear" Tenneckermann  - Human Veteran Wilhelm Hechland  - Human Engineer Doctor  Johann Wilhelm Woeller  - Human Physician ( Previous notes ) Johann returned to his barber shop just in time for Maximillian to walk in. "So," Johann began, "What brings you to my humble shop, Oh Venerable Master of the Horse?"﻿ Maximilian looked up at Johann then out to the street. Crossing the street were Johann's "friends" Tankred, Wilhelm, and Vaervenshyael. On entering Johann's shop, Maximilian wasted no time. "The Empire seems to have found our little corner of the world. I'm a pious, but practical sort. Know this, the end truly does justify the means in all things when it comes to change and rooting out the influence of the ruinous powers or to protect Padua." Maximilian looked at Johann and Vaervenshyael knowingly. "It may even mean looking the
Read more

November 19, 2015
My PC Vaervenshyael  - Female Elf Duellist My companions Tankred "Silver Bear" Tenneckermann  - Human Veteran Wilhelm Hechland  - Human Engineer Doctor  Johann Wilhelm Woeller  - Human Physician ( Previous notes ) ( Note: This sitting was short due to technical issues.) Tankred left with Russmann to visit the Princeps. Johann continued speaking with Cosetta in hushed tones. Voices in the crowd began speaking disparagingly about elves. Vaervenshyael isolated a voice and challenged the man to a duel. He drunkenly charged her. She slashed his left arm. He charged again, and she clunked him on his head with the hilt of her rapier. When he would not relent, she slashed him across the chest and then knocked him out. She returned back into the tavern looking for more people speaking lies about elves.
Read more

November 16, 2015
My PC Vaervenshyael  - Female Elf Protagonist My companions Tankred "Silver Bear" Tenneckermann  - Human Mercenary Wilhelm Hechland  - Human Engineer Doctor  Johann Wilhelm Woeller  - Human Barber Surgeon ( Previous notes ) The crowd at Katerina's Rest lingered. Small groups huddled. The name Russmann was mentioned and heard at tables, in the latrine, at the bar. The Reverend Brother Neidhart Russmann. Footsore. Lean, broadshouldered, bald, and "called." But then what was he saying: evil out of the west? All these firebrands said they saw the influence of the ruinous powers on the winds. Possessed, only the possessed "see things." Or he's right: Padua is lost to Chaos influence. The Robber King to the North was actually slaughtering greenskins. Maybe the Princeps and his Master of the Horse have been too tolerant. Tolerant of that Cunning Man on the river. Tolerant of the heathen in the East. Tolerant of that rich Arabyan always
Read more

November 13, 2015
My PC Vaervenshyael  - Female Elf Protagonist My companions Tankred "Silver Bear" Tenneckermann  - Human Mercenary Wilhelm Hechland  - Human Engineer Doctor  Johann Wilhelm Woeller  - Human Barber Surgeon ( Previous notes ) The party awoke to a new Sigmar priest calling worship at the temple. We all made our way from our places of residence to the center of town, where the firebrand was calling upon the residents to return to pious worship. Tankred joined those following the priest to the Sigmarite temple. Vaervenshyael attempted to speak to Wilhelm about her distrust of the new priest, as well as the possibility of commencing shooting practice, but Wilhelm was acting awkwardly. He did show her some basics of loading, aiming, and firing, before suggesting she go practice against a barn somewhere. Back in Katerina's Rest, there was much talk about the new priest. Terms like "long overdue" and "inspired" were murmured around the barroom.
Read more 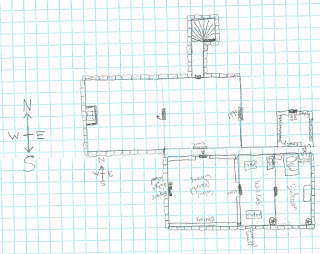 My Character Gairloch Ironheart  - Svirfneblin Priest of Grumbar Companions Jemmabink - Gnome fighter Nina - Human Paladin of Helm with her Dire Wolf mount Vahael Corrolon - Human Cleric of Helm Revoltac - Elf Ranger Kaiden - Half Elf Mage ( Previous notes ) We returned to our party keep, which we agreed to call Keep Vigilant, to continue repairing the walls. Gairloch, my Earth priest, had a few different spells to soften and shape stone. It was calculated that I could fix a 20x20 section of wall per sleep cycle. This sleep cycle was shortened by a magical ring Vahael offered to let me use. On the second day after our return, we received a message from Lord Tessaril. We immediately traveled to her home. She reported that Arabel had reopened after an internal rebellion fought in the name of Gondegal, an old time rebel from Arabel. Myrmeen, the Lord of Arabel, had closed the walls during the rebellion. Now that the gates were open, we could travel there and find out info
Read more 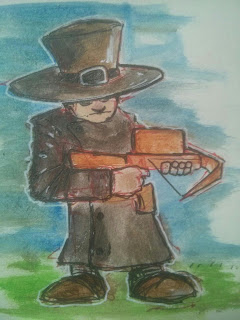 A while back,  Byron Rempel , zombie artist extraordinaire, offered to do some rather inexpensive character paintings. I hit him up for a couple. Here's the second character, my Warhammer Witch Hunter  Maximillian . It's not exactly how I picture him, but it's always nice to see other people's interpretations.
Read more

November 02, 2015
Mist: Human Shadow Walker (Mage/Thief) Jaden : Human Justifier (Ranger) Jairus: Elven Mage/Thief Kell: Human Ravager (Barbarian) Sanaka: Human Windwalker (Priest) Gunel: Human Fighter/Gladiator Hobgoblin Ambush: The ranger and the elf suspected an ambush but were not able to see anyone hiding in the trees. The hobgoblins (I upped the difficulty from goblins) shot out of hiding and hit the priest. The ranger was able to spy the creatures hiding in the trees and point them out to the rest of the party. The priest used this aid to line the hobgoblins in Farie Fire. The party took out 4 hobgoblins, and one ran away. Hobgoblin Trail: The party hid the oxen cart and followed the stray hobgoblin. The ranger was so intent on the trail that he failed to notice a snare trap in the path. He found himself hanging upside-down 10 feet off the forest floor. They found the rope and eased him down. The shadow walker helped him check for traps from there on and found the pit trap before an
Read more
More posts