July 12, 2013
Our party is hired as the personal bodyguard to the lord of the land. The lord wants to go on a cockatrice hunt. Events go downhill from there. 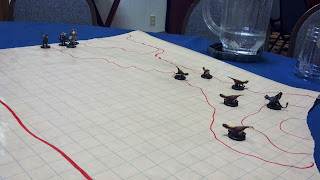 My PC
Kaide One-Tusk, half orc paladin. I once had a half-orc cleric who told everyone he was a paladin. This character became a natural extension of that one.

Notes/Encounters
The only children in the castle were teenage daughters. They all looked similar, though they all had different fathers.

The lord took us on a hunt for cockatrice eggs. Kaide fought off the creatures on a mountain pass, while the other two party members climbed down the mountain side to raid cockatrice nests.

Kaide explained what he was doing, his battle tactics, etc. to the lord while fighting off the creatures. He wanted the lord to know that he had gotten a good investment on his money.

By the way, one of the cockatrices we a dire version. The rest of the party climbed back up from their egg hunt to help Kaide kill it.

On our way home, a medusa came running after us screaming, "my babies! My babies!" She was some kind of cockatrice caretaker. The lord wanted her alive, so we had to knock her out while avoiding her gaze.

When the medusa was brought to the castle, all statues in the place became animated to try to help her escape. Our characters could do little to nothing to hurt the statues. Kaide ended up running around them to get into the dungeon where the medusa was being judged by the lord and the other men of the keep.

The makeshift courtroom in the dungeon was an ominous sight. The men, even the priest, were vehemently cursing the medusa for nothing more than her mere existence. She asked, "is this what I get for services rendered...for giving you each daughters, as requested in exchange for my safety?" It was at that point that Kaide had the clarity of mind to use his Detect Evil ability. Everyone in the basement was evil. The epic endgame battle began.
Other Systems Play PortCon RPG