Showing posts from January, 2009
Show all

January 29, 2009
We were trailing our two Skaven guides for hours and hours upon end through the underground passages when Lorr suddenly stopped in front of us and pointed down at some yellow mould on the tunnel floor. He was telling us the mould was deadly when it moved and shot out spores. In front of me, Starlana just dropped. I couldn't catch her. I tried, but between her and her gear, it was just too heavy for me. I guess people shouldn't expect me to catch them when they fall. There's probably a deeper lesson to be learned here, but you don't always see the bigger picture from an underground tunnel. I dragged Starlana back out of the mould's blast radius and we all waited for her and Ben to wake up. Randy crept forward and was offering some strange snuff he had taken from Lord Doyle's house. Gunthar advised me to not touch the snuff, but it seemed to do Ben a world of good. Lungs that had been injured by the spores suddenly felt fine. The two men continued on as
Read more

A Beginning for Beginners

January 24, 2009
The WarHammer world is a vast place, much larger than our own globe, yet if you look at the map, it looks rather familiar. Where Europe would be on our globe is a place, a continent if you will, known as The Old World. It is analogous to Europe in the Middle Ages, consisting of a number of small, independent states sharing a similar cultural heritage and a common language, Old Worlder. Within the continent of the Old World, the largest country is known as the Empire. It comprises a vast conglomeration of princedoms, duchies, leagues, and city-states. The Empire was united under one Sigmar Heldenhammer, who attained immortality and is now the patron deity of the Empire. The Church of Sigmar is the guardian of the Empire. It is for this church that you work. A missing artifact of a sensitive nature has caused the Church of Sigmar in Altdorf to ship you down to Nuln. The day after you arrive, you are to meet up with one Albrecht Oldenhaller at his residence in Nuln’s merchant district
Read more

January 20, 2009
(Boy, these sewers were long. Seriously...two months to explore. Now that's a little rediculous.) We had no idea what was going on in the underground temple. Gunther wanted to destroy the place, though, and thought we could use Lorr's help to do it. We decided to head back to the Doyle manor to fetch him. On the way to the manor, we spotted a short humanoid far off down the tunnel. He was pretty much at the edge of our vision, and he ran off when Gunther called to him. That's never an innocent sign. We chased the figure throughout much of the sewer system, but couldn't catch up to it before it slipped down a small hole. We had no choice by to go back for Lorr. After some modifications to the hole in the floor, and some explanations to the butler Bartloff, we were able to get Lorr into the sewer. We proceeded on to the temple. The men were flexing their muscles and toppling over altar stones when I found some bones partially buried in the floor. The others
Read more 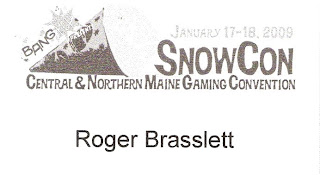 Yesterday I had the pleasure of attending the first gaming convention ever to be held in the area (to the best of my knowledge). It was a great deal of fun. I arrived at 7 AM and got my hand-dandy little name badge and bracelet with my player number on it. Then I promptly sat down to wait for friends to show up, watching the classic Dungeon&Dragons cartoon, stewing because there was a sign indicating we weren't to bring in outside food or drink. I totally should have stopped at the convenience store first . After dawdling a lot, I arrived at my first game, D&D 4e Delve Night. I hadn't played 4e before, and wanted to know how to do it so I'd be comfortable at the 5 hour 4e gaming session I signed up for that night. At Delve Night, I was issued a Wizards of the Coast DCI card, whether I wanted one or not. See: It was a good learning experience, and the DM was very patient. As a matter of fact, our 1 hour time slot ran for 2.5 hours because we were
Read more
More posts