July 05, 2013
It's an alternate reality. Professor X is the head of the Hellfire Society. Dr Doom runs the other faction in town, the Allied Nations. Neither are "good." The adventurers are dragged from their own continuums to overcome a world-altering event in this timeline.

My PC
Psylocke: Filled with assassin and telepathic abilities. 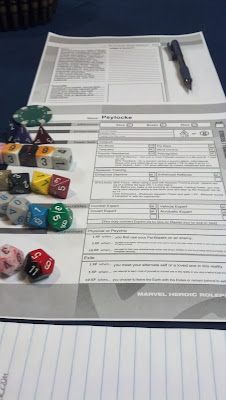 Notes/Encounters
I used my telepathic abilities to trail someone who turns out to be a clone of Peter Parker, Cain Parker. The second Spiderman we now know, after the one in our party.

We split up. The other part of our party meets Peter Parker. The third Spiderman we now know. There are far too many Spidermen for this to end well.

Our part of the party is recruited into the resistance, led by Captain America and a crippled Tony Stark. The other half of the part is recruited by Peter Parker, who has bought and taken over the Baxter Building.

It turns out the X-Men don't exist. Psylocke is a little at a loss. She also finds out that she, not her brother, is Captain Britain in this reality. How's that for a lot to process?

The endgame battle takes place at the Baxter Building, where the Hulk is activated to try to take out both the Hellfire Society and the Doom Alliance...and everyone else in the building.

Thanks to our heads-up, the resistance was able to nullify Hulk's rage after a (relatively) short period of time, circumventing total destruction. We also nullify Peter Parker's alliance with a multi-unit robotic supervillain (whose name I forget).

We left the GM's expected series of events early on, and he had to make up a lot of circumstance on-the-spot. You couldn't tell, though, and things were pretty smooth. We felt like we made a great contribution to the timeline.
Other Systems Play PortCon RPG