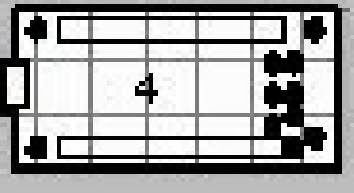 A closed wooden door bars entry into area 4. If the Skaven from Area 3 have retreated here to set their ambush, the door is locked. With a successful Pick Lock check, player characters can open it without the key.

Note that the door is unlocked if the Skaven from Area 3 do not retreat to this area. Once the PCs gain entry to the room, read the following out loud:

This long, narrow room is lined with shelves loaded with foodstuffs and supplies. Heavy burlap sacks are piled atop one another in the corners of the chamber. A few have been torn open, leaving spills of oats and flour along the floor. Several barrels stand in a cluster near the far northern wall.

As in previous rooms, there is no light source present here. The room is 60 feet long by 15 feet wide, with the shelves effectively hedging it down to a width of 10 feet. There are a number of Creatures hiding in the room as well as a single Trap that can be set off only from behind the six barrels by the northern wall. The shelves have some valuable goods on them but the real find is the Treasure concealed in Barrel 5. There are no other exits to this room besides the south door. If the 5 Skaven from Area 3 have retreated to this room, they are hiding behind the barrels with their crossbow pistols ready, gaining coverage bonus so long as they maintain their cover. When the party sets foot through the door, one will spring the Trap while the others unleash a volley of bolts across the room. Note that the width of the room makes advancement difficult for the party, as there is only enough space for two individuals to progress side by side at a time. PCs can take cover behind the shelves or sack piles and should be reminded of that option, should the situation take a turn for the worse.

Trap: Several sacks of flour are tightly hung from the ceiling by a network of ropes. The interiors of the sacks are lined with a sharp wire, which is in turn connected to a single ripcord hanging by the group of barrels at the north wall. Anyone who takes the time to make a Search check (+20%) in the room almost certainly will discover the fairly obtrusive trap. Once it is noticed, no roll is necessary to disable the trap, assuming the PCs have access to the ripcord (i.e. it is not in the hand of a skaven across the room).

Once the trap is triggered, the ripcord tears the sacks of flour open, showering their contents onto the room below. The flour spills across the southernmost 40 feet of the room, temporarily obscuring the sight of anyone standing within that area. For the first two rounds after the trap is sprung, anyone standing in its radius has a -20% WS/BS with any form of attack, as if their enemies were concealed (which they may also be, giving a further -20%). In the third and fourth round, the miss chance falls to -10%, as the flour cloud begins to settle (enemies still concealed get -30% total coverage). By the fifth round, the cloud is no more and attacks proceed as normal.

Creatures: Two sets of rats wait in this room.

Barrels 2 and 5 are each filled with rats (4 apiece). They will not venture out of the barrels unless they are somehow disturbed, be it by someone smashing the barrels, rifling through their contents, tipping them over, etc. Any of these instances will provoke an attack from the maddened rats, which are suffering from the effects of the Plague (and therefore contagious) and are fairly hungry to boot.

Special Qualities: Scent: Detects nearby enemies through smell. Contagious: Individuals who come into contact with a contagious object or creature must succeed in a Disease check or become infected with the Burning Plague.

Treasure: The shelves contain very little of value. They are laden with poor quality food, most of it contagious due to the presence of the rats and Skaven, and some basic food preparation and storage utensils. The six barrels, however, hold a few goods worthy of further examination. In the instance that one of the barrels is targeted for an attack, all six are alike in the following stats. Wooden Barrel: 1 in. thick

Barrel 1: A cask of high quality wine. Although currently contagious, the wine may eventually become good again, should the adventurers defeat Tiklisp and end the Plague. The wine was an extravagant gift from a merchant to the miners of Duvik’s Pass, with the hope of currying favor as the town’s silver industry picked up. It remains almost full, as neither the miners nor the Skaven found it to their taste. The cask will fetch 20 crowns if sold upon the quest’s completion.

Barrel 2: Filled with strips of contagious dried beef jerky (and rats), this barrel holds nothing of value.

Barrel 3: This barrel stores the lamp oil formerly used in the mines’ lanterns. It is, of course, highly flammable. If its contents are exposed to fire, the resulting explosion has a 20-foot splash diameter.

Barrel 4: A half-consumed quantity of strong (and contagious) ale. Apparently this sort of drink was more to the miners’ liking than the wine in Barrel 1.

Barrel 5: Filled with the remainders of a few contagious wheels of cheese and the rats who have been busily consuming them. A successful Search check reveals that the bottom of the barrel is in fact false, concealing a hidden compartment. Within the compartment hides a small cloth bag containing a moonstone (5 gold), a gold brooch with a jade inlay (25 gold), and three pieces of moss agate (worth 1 gold apiece). Additionally, the bag holds 3 gold crowns and a vial with a potion of Invisibility. The stash of one of the miners who enjoyed a secondary, less reputable occupation, this treasure has been left behind following his demise.

Barrel 6: Holds salt for use as a spice and preservative.