Unless the PCs have their own light source, this room is dark. 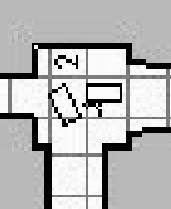 The tunnel opens into a small, roughly rectangular chamber. Scattered chunks of silver ore surround an overturned pair of wooden carts. The lower half of what appears to be a human body juts out from beneath one of the cart’s edges. It shows no signs of movement. Dried blood is smeared across the northern wall in several places. Some old clay pots lie about the floor. Exits lead to the west and the east.

The cart the body is pinned beneath is rigged with a line attached to a stone concealed in the ceiling above hanging over an empty clay pot. There is a -10% chance to see this line when Searching due to the lighting and the line’s thinness.  Anyone disturbing the cart, either by turning it over or by seeking to drag the body out from beneath it, will snap the line and send the stone crashing to the clay pot. Anyone within 10 feet of the cart will be affected by the resulting shards. Characters hit by shards will not take any damage

If the PCs trigger the stone trap, the Skaven in Areas 3 and 5 will be alerted to their presence. They will make the appropriate preparations described in these areas. If the PCs do not head to the Mess Hall next, the Skaven there will sneak behind the party and come out to attack when the party meets with the Skaven in area 5.

Looking Closely
The chamber is 25 feet wide and 25 feet long. The lanterns that once hung from the walls here as illumination sources have been smashed against the ground and no longer function.

The west exit is a tunnel 30 feet long that leads to Area 3. The east exit is a gradually sloping ramp that leads downward about 60 feet before opening into the central mine in Area 5.

The corpse is the miner’s chief engineer, Jacen Tungstan; party members who have researched the mines of Duvik’s Pass may recognize him. He is obviously the victim of foul play, having suffered several puncture wounds to the chest and neck area. There are a number of crude broken crossbow bolts within the puncture wounds that Jacen apparently died from. A successful Heal check reveals that Tungstan had symptoms resembling those of the Plague and that he has been dead for about two weeks.

The body left beneath the mine cart serves as a Trap for any meddlesome adventurers who disturb it or the cart that it lies beneath. The ore found around the body serves as Treasure. The body has remained unmolested in this area for over a week and is no longer contagious.

When the mine was operational, this area served as a commons area for sorting, weighing, cataloging, and shipping out ore. When the Skaven invaded, it was used as a final rallying point for the miners. The few who did flee the resulting melee were cut down by the mine’s entrance. The remainder of the defenders died here.

The chunks of silver ore can be salvaged and are worth 2 gp. A character with the Appraise or Profession: Mining skill can appraise their value.