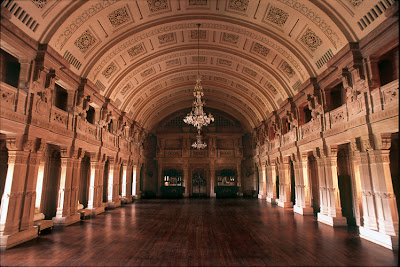 Last Tuesday I asked, "Where did that entrance come from?" I had a few ideas, but I received a few others from Google+. The one that really caught my attention was a sinkhole. Let's imagine that the picture above has a sinkhole coming in from the ceiling right about where that chandelier is. This is the starting point for a dungeon I'm (very) slowly going to create.


Opening: A sinkhole has collapsed into and underground hall. Nobody locally, even historians, knows about any kind of worked complex in this area. Work is currently being done to try to stabilize the sinkhole, while adventurous types are being recruited for an interior investigation.

This is a pretty easy way to get the characters pulled in to the adventure. Another idea is that if the PCs don't take up the challenge of exploring the underground find, they will occasionally hear reports about what's going on down there when they are off on their other adventures. At some point the reports should start to pique their interests...but that's an idea for another blog post.