The Grand Olpha allowed us to loot the fortress, if we could defend ourselves. We didn’t think we could do that for long, so we made a rush job.

In the king’s war room we found a map of Icewind Dale. There was a track circling the towns starting at Dougan’s Hole and running counterclockwise. It had a small chartalain dragon to mock flying the path. The elf bladesinger took it.

In the king’s bedchambers we found a chest at the foot of the bed. Thom the rogue picked the lock. There were a bunch of numbers inside that we never found the meaning of. And there was a poison gas trap. The elf bladesinger. Thom poured a healing potion down the elf’s throat to bring him back to the barest semblance of life.

In a closet off the bedroom was a small shrine. There was a chartalain goddess and seven mind flayer skulls. Nobody wanted any of that, so we left. It was also time to leave the fortress, as the bladesinger didn’t have any spells and the druid was about to lose his summoned bears.

The next day the elf bladesinger cast Detect Magic on some of the loot we gathered from the king and from his footlocker. There was a magic gauntlet, a crown, a javelin, and the dragon that Grand Olpha gave Prax.

On our way back to towns, a sled dog team caught up with us. It was driven by Vallynne Harpel. She’s searching for the Codicil of White, had heard of us, and wants our help. It seemed a little out of nowhere, but we told her we could help after we finished our current task. She said she could help us in our task, then we’d all look for the Codicil together. Little does she know what our task involves!

Vallynne got us to Dougan’s Hole faster than we could have ridden ourselves. The elf bladesinger did managed to identify 3 of the magic items while en route[1].

We found the town completely razed, the hole itself being the only thing remaining! We saw no survivors and nothing we could do, so we immediately set off for Good Mead.

At Good Mead it looked like everyone was dead as well. The town was also razed except for the mead hall. There were some survivors there. The town speaker was killed. It was by a dark dragon. The dragon took off for Easthaven a couple hours ago. We are now racing to meet the dragon, and possibly our doom, in Easthaven.

[1]       Crown of the Mountain: +2 AC, +1 to all healing dice rolled (Given to Dragonborn Fighter)
Gauntlet of Force: 3 charges. Regains d4-1 charges per day. +2d6 Force damage and Push Back (Given to Bladesinger Elf)
Javelin of Lightning: “Garta” is activation word/name. 30-120 ft. d6 damage. Once/day add +4d6. Target gets to make Dex check vs 13 CR for half damage (Placed in the Quiver of holding)

November 09, 2008
The boy Gunthar has paid for me to have a bath and some new clothes. My hair is no longer dirty and matted, and I feel like a completely different person. I found some faded, but matching shirt and breeches, some used boots, a cap, tunic, and scarf. We headed to the Illuminated Fish Tavern. Gunthar headed across the street to pray. I went inside to grab a seat. Starlana already in there and Lorr came in shortly afterward. Lorr had a broken sword tip he found at one of the burned down houses. Gunthar came back in as we were examining it. We decided to keep the sword tip and not turn it in to the authorities quite yet. It was our only clue and we were pretty sure we wanted to go on the quest to find out why nobles were going missing. I know I want the money. When we separated for the night, we didn't have a place to go, so Gunthar and I headed back to Joseph's cottage to ask if we could camp on the lawn. I had mentioned that I have a tent, and Gunthar said we could
Read more 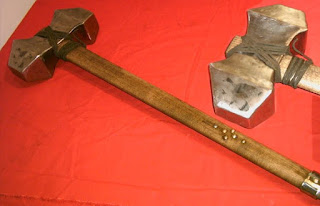 Amorti is a maul, sized like a mace or a hand axe, with an iron head. Both sides of the head have a hammer, neither are spiked. The heads show little signs of use. There is some discoloration (not rust), but no scratches or dents. It will show up as a high powered magical item on a Detect Magic/Sense Magic check. WarHammer Stats: +10 WS, +2 Damage, +10 Parry, Ram Strike S times per day. This hit will break any body armor and render the part of the body hit as useless for d6 minutes. Any creature may attempt a T check to remain standing.  If the maul hits a shield on a parry, the shield will be destroyed.  The shield arm will be numb and useless for d6 minutes. The PC must declare use of the power before rolling to hit. A miss does not use up a use of the power, but the power will automatically be activated for the next hit. D&D Stats: +2 magical weapon (+2 to hit, +2 damage). Small bonus to parry, if parrying rules are used. Ram Strike STR/3 times per day.  Th
Read more