Thoughts on Volo's Guide to Monsters 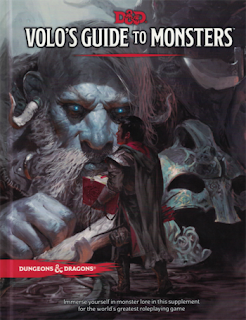 I picked this up last month pretty much so I could get Amazon to ship me a DVD they considered an "add-on." I have heard some pretty good opinions of this product, so let's see! *Spoilers below*

Beholders There is more lore here than I have ever read, or imagined, on beholders. (Good choice by the powers-that-be on choosing a copyrighted creature to expand upon.) I can almost see them having the paranoid personality of the most successful Skaven, though a lot more intelligent! The info on lairs is excellent and fuels a lot of ideas, especially for dungeons.

Giants There is some information about the specific mindsets of each type of giant. Every little thing to distinguish the big bad guys is nice, but I didn’t find the chapter overly enthralling.

Gnolls Well, the background of these creatures has been amped up a bit. Constantly hungry demon spawn, I don’t see myself using these much. A warband every so often as a rarity is definitely more than enough. I do like the random tables for creating a warband.

Goblinoids Your game is going to have goblins. They are just that prevalent in D&D. This section describes goblins, bugbears, and hobgoblins. I think bugbears are probably the coolest, especially since they are described more like a pride of great cats.

Hags This was an interesting creature to expand upon. It was be great to throw one of these in your game, without either overpowering things or distracting your game too much. I think the Banshee in Lost Mines of Phandelver is rather like a hag.

Kobolds The most interesting idea I took from this section was a type of kobold called the ‘city kobold’ that lives under human settlements, taking care of the sewers in return for defenders living above them.

Mind Flayers Psionic Borg that I don’t have any intention to start using in my games.

Orcs Much like goblins, there will be orcs in your D&D world. It’s good to know their mindset, hierarchy, and war camp setup.

Yuan-ti There is the perfect amount of information in this section to make these snake creatures a part of your game if you wish, but there’s also an out if you don’t want this race to feature in your campaign.