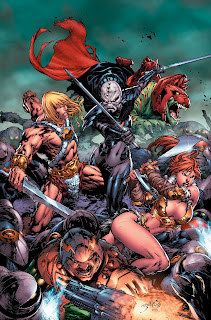 I saw a link to this comic on Google+ the other day and figured I'd pop down to the local comic book shop to check it out. The cover was extremely evocative, and the art inside was pretty good, so I decided to grab it. $2.99 isn't overly much for a comic and there were other things I also wanted while I was at the store.

For $2.99 it wasn't too shabby. The interior art was well done. Teela definitely gets the "T&A treatment", to quote a concern from Google+. She is walking around in her underwear at one point in the comic.

One of my original concerns during the comic shop flip-through was that there wasn't enough text, so I assumed that would mean dragging out multiple issues to get a basic premise for the first story arc. That's not the case. The story is set up well.


The story references some events that I'm not familiar with but the writers seem to expect the audience knows. I would have liked to see more of the other characters besides just Duncan, Teela, and Adam/He-Man. It wasn't too bad. I'll probably buy the next one...and keep catching up on the cartoon.﻿
Comics Reviews