The three Sigmarite zealots previously rescued from a pack of wild beastmen proceeded to ignore the female elf as much as possible during their travels. Instead they spoke of one "High Hammer" who will show the party "the works of their faith at the tower." They claim to have purged the Ruinous Powers from the tower. Which leads Vaervenshyael to presume that Chaos has been in the tower at some point. 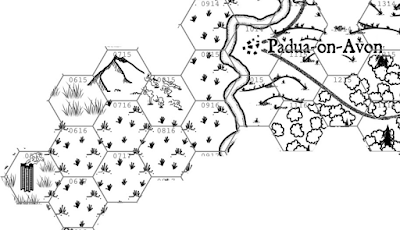 The final useful bit of information the Sigmarites share before the party rests for the night is that their "recent guest" is a learned man from Lauderberg [north of Padua]. The zealots then proceeded to somehow disappear from camp during Vaervenshyael's watch.  Howls were heard to the southwest during Tankred's watch, but nothing else of real significance occurred during the night.

The following morning was a chilly one. The party resumed their march as much for warmth as to get to any specific destination. Along the way, the bodies of the Sigmarite zealots were found mauled. The area was covered in the footprints of a large wolf (or two, the Doctor couldn't be precise). Considering their loss negligible, Tankred and Vaervenshyael kept the party moving. Wilhelm and Johann were left to their own ruminations of the value of the zealots' lives...or lives in general.

Finally, in the distance, the party spied a 200-foot tall tower. The tower let forth a continuous column of steam out of the top. Vaervenshyael was initially reminded of dwarf technology. High on a plank there was a lookout. Approaching the tower was a long thoroughfare with what were apparently more zealots. 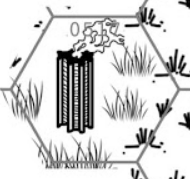 The party approached the tower through a gathering group of Sigmarite zealots. The zealots were unarmed, but Vaervenshyael remembered the hostility of the others on the road. She did not take her eyes off these uncivilized beasts as she approached. Doctor Johann spoke with the Sigmarites upon the approach, but Vaervenshyael paid little attention, until the Doctor said "What did this one do to deserve his punishment?"

Vaervenshyael turned to see what the Doctor was talking about. She saw the Verenean priest Roderic hanging outside the tower, tied to a post, sunburned, and mostly dead. The elf steeled her gaze, drew her sword, and boldly proclaimed, "this man is a citizen of Padua, and under the protection of the Princeps and his Master of the Horse. He is coming with me!" She then rode for the post to cut the priest down.

The Sigmarite zealots began to surround the party in a manner much more threatening than they previously held. Tankred pulled his sword to defend himself. Wilhelm pulled his Robber-Reducing Hand Cannon, but had no intention of waiting to be attacked. He fired on the nearest Sigmarite.

Battle was joined. Vaervenshyael defended herself from the attacks of two zealots, killing them both. She ignored any others in favor of cutting the priest down. The battle fought on around them, but Vaervenshyael heard the priest say "I know the truth...I know the truth." She saw the magical tooth hanging from around his neck. It was obviously not safe in his possession, so she yanked it from his neck and stuffed it safely into an inner pocked of her clothing.

When the last zealot was dispatched, the Doctor thoroughly examined the Priest. Johann looked at Vaervenshyael and said "he vill live."
Play RPG Vaervenshyael WarHammer