The party spent a lot of time talking about upgrades to their new keep, assignment of rooms, and others to invite in to help run the place. There was a period of three days in which Gairloch did nothing but cleanup and repairs (made easier by using Dig, Soften Earth and Stone, and Stone Shape). It took 3 days to rid the keep of the bodies of the giants and bugbears that previously inhabited it.

On day 3, a tall, blue man in a magnificent cart arrived. It was an extravagantly long cart, pulled by 12 horses. Jemmabink reportedly knew the man driving the cart and called him Sereem. He apparently arrived at the whimsical summons of Jemma as a merchant to buy and sell some of the party's new-gotten gains. Gairloch had to pause working on the keep to unearth some of Jemma's hidden treasures buried beneath the inn in Eveningstar. 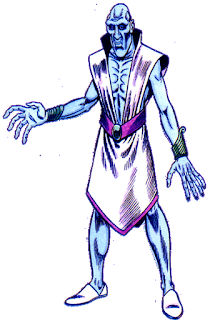 After much bartering, the party was able to rid themselves of items they didn't need, load up on gold for running the new keep and buying equipment, and provide the half-elf mage with a full laboratory. It was win-win, except Sereem who didn't exactly seem to find what he had come looking for.

Following the visit from the merchant, it was time to break and head back into Eveningstar to re-initiate alliances and spend some gold. The first stop was Dunman's tavern, where the party was apprised of the current xenophobic isolation of the city of Arabel. Nobody was currently allowed in or out after the attack on Eveningstar. Next was a visit to Dhurthal's smithy where Nina dropped off some armor to be fitted and altered. Then it was to the traveling merchants in Eveningstar (helped by the fact that they could not get into Arabel) for some outfitting of the keep. Old Meg found us there and banged on Nina's shinguard for allowing the "new ones" around after clearing out the "first ones." Nobody knew what to make of this, but figured she was talking about Pillar Rock. We made a mental note to check the place out on the way home.  Finally, Lord Tessaril met us on the road outside the market, upset that we had not come to see her first.

While trying to appease Tessaril's pride, the most singularly strange event occurred over the town. The form of Lathander appeared over the Temple of the Light. As if this was not amazing enough, the form of Eldath appeared over Pillar Rock, the site of her temple we recently cleansed. The two forms strode the sky toward each other until they met in the middle. The two forms made loving gestures toward each other, and then there was a loud breaking sound as if the cracking of a large tree (according to the ranger) or the breaking of the earth. The ground shook, and the two forms disappeared. Lord Tessaril looked at the party and told us we were up [to bat].

The party followed the clues toward Pillar Rock. On they way, they were stopped by a new stream that had appeared since they had come into town. It was located halfway between the two temples, and directly across the route both home and to Pillar Rock. It was too fast and deep to ford, so Gairloch and Vahael cast Water Walk to get the party across.

Approaching the area of Pillar Rock, the party quickly noticed that the sizes of the trees had greatly increased since they were there last. An alluring elven female with green hair stepped out from behind a tree to examine the party.  When she was addressed, she ran into the tree and disappeared. The party mage was able to identify the creature as a dryad.

At Pillar Rock, the entrance was uncovered. An elf female and human male emerged to greet the party. They were both wearing the symbol of Eldath. They explained that followers of Eldath had come to repopulate the holy area inside the rock. They called themselves Peacemakers and Peacekeepers. As if to accentuate that fact, an orc in the same outfit stepped out of the entrance.

The Peacekeepers stated they were there to preserve the area of nature surrounding Pillar Rock. They were also rather concerned of rumors they had heard of King Azoun liberally allowing deforestation in his kingdom. They party was not able to help in this regard, but they agreed to share the concern with Lord Tessaril.

The party asked if the priests were responsible for the fierce stream that cut off access from Eveningstar. They stated they weren't directly responsible, but they could take care of the inconvenience for us.

The party offered their services as allies to the north and then left to share the news with Lord Tessaril. On the return, the party found that trees on other side of the new stream had branched their roots over the new waterway to form a very sturdy bridge. They could come and go as necessary.

Lord Tessaril was glad for the news from Pillar Rock. The party was again in her good graces, and she asked them to be available for a future service she may need to ask of them. They, of course, agreed and then left to check on Nina's armor at Dhurthal's.

By the time the party arrived, the master smith had shaped Nina's armor to perfectly fit her torso. He had arranged certain gems and a holy symbol she had given him into a perfect pattern over the breastplate. He then became really serious and asked her how powerful she really wanted the armor.

Nina convinced Dhurthal of the justice she desired to meet out in Helm's name. He offered to imbue the armor with magical strength at great personal cost to himself. The paladin tried to decline, but an augury from Gairloch and a prayer to Helm convinced her it would be alright in the end.

Dhurthal asked Jemmabink to assist him and Gairloch to be at the ready while the smith dismissed his apprentices and started chanting. Nobody could recognize the language, but the deep gnome did recognize familiar terms in ancient, deep dwarvish dialect. As Gairloch watch, certain of the smith's features became more apparent than usual. The man was wide, rather hairy, and extremely dwarvish as he chanted power into the armor. It was almost like an illusion or a mirage, which ended when the smith stopped chanting and slumped to the floor. Gairloch was quick to help him, casting many healing spells of varying power to stabilize the exhausted man...for human he again appeared to be.