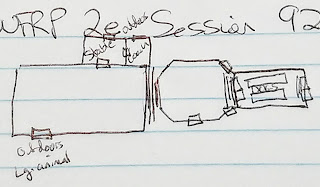 Tankred was impatient to get this quest over with. He kicked in the first door on the left, into what looked like a stable. Two gunshots rang out from a wraith-like creature wielding pistols. Vaervenshyael tried to shove Tankred away from the doorway and out of the line of fire. Unfortunately, the creature's aura held Vaervenshyael in the grip of fear and she couldn't move.

When Vaervenshyael broke the spell of fear and she could move, she wanted to stay as far away from the monstrosity as possible. She pulled her own pistols and fired...with very little effect. She was forced to pull her hand weapons and engage. Her first attack with her rapier killed the creature that Tankred had beaten down.

The straw in the stables was moldy. The floor, marble. A door to the east led to a coach-port, with a large, black, menacing coach. Doors from the stable and the coach-port both led to the strange outdoor landscape. The item the team sought lay inside, so back in they went.

Tankred returned to the main hall and kicked in the first door on the right. Outside were large, menacing shadows with ominous growls. An unseen shape flowed past the door. The team closed the door and focused on the other end of the hallway. Anything that led outside was a distraction. Anything large enough to swallow the team was potential roadblock.

Stair at the end of the hallway led up to an octagonal room. There were single doors on 3 of the walls and double doors directly ahead. On the other side of the double doors was the smell of smoke and some growls.

Tankred kicked open the door into a kitchen and dining area. Whoever previously occupied the room left it to a pack of large dogs (10 total), which were crawling over the tables and eating scraps. The dogs saw the party and attacked. Vaervenshyael was able to avoid bites and claws, while dispatching 3 dogs.
Play RPG Vaervenshyael WarHammer