Fifteen miles east of Phandalin, in the deep vales of the Sword Mountains, lies Wave Echo Cave. The rich mine of the Phandelver's Pact was lost five hundred years ago during orc invasions that devastated this part of the North.

In the centuries since, countless prospectors and adventurers have searched for the lost mine, but none succeeded until the Rockseeker brothers found the entrance a month ago. Unfortunately, the Rockseekers did not realize they were being trailed by spies working for Nezznar, the Black Spider, and they inadvertently led the drow villain to their prize. Nezznar and his followers dealt with the two Rockseekers who were guarding their find, then arranged for Gundren's ambush. Learning of the adventurers' involvement with Gundren and their exploits around Phandalin, the Black Spider has given orders for characters to be dealt with. Meanwhile, Nezznar has begun his exploration of Wave Echo Cave.

The drow is searching for the Forge of Spells, where the human mages of old Phandalin enchanged dwarven weapons and gnome gadgets. However, Nezznar's exploration has been hindered by the restless undead and dangerous monsters that lurk in Wave Echo Cave, forcing him to proceed with great caution.

Outside the entrance, the party found a large cart and a couple draft horses. Sanaka cast Speak with Animals to question the horses. The horses essentially described hobgoblins delivering delving equipment. They also said they'd be perfectly happy leaving with the party whey they left, instead of waiting for the hobgoblins to come back out.

The cave entrance was a long tunnel into a mountain that opened up into a cave. In the cave were four hobgoblins arranging equipment to shortly be lowered into a fissure in the back of the cave. The party fought through the four hobgoblins to find the dead body of Tharden Rockseeker, dead for at least a week. Gundren's other brother, Nundro, was nowhere to be found.

The party noticed two passageways at the bottom of the fissure, one to the east and one to the northwest. They had to fight three spear-throwing troglodytes whose chameleon-like abilities had kept them hidden up to this point. Sanaka quickly negated the spears by putting up a Windwall.

After some scouting to the east by a Spider Climbing Mist, the party took the northwest passageway, the one more obviously used. Their exploration was almost immediately stopped by bugbears guarding the tunnels. The party members who had first entered the tunnel were a bit overwhelmed by the bugbears until Jairus threw up a Globe of Darkness. The party then retreated from the passageway to regroup. The bugbears evidently had the same idea, as they were gone when Jairus dispelled the darkness.

The Battle at the Pool

Four bugbears had regrouped in a cavern with a dark pool. They lined up in front of the room's openings, making the party attack them one or two at a time. Mist foiled this scheme with more Spider Climbing up and over the bugbears' heads. Unfortunately, as she was descending on the rear of the bugbears' position, two troglodytes burst out of the dark pool and threw spears.

In the end, the party won the battle, at the cost of spells and their own blood spilled on the cavern floor. The dark pool was plumbed, finding two platinum rings and a wand still held in the hand of a skeleton. The party decided to retreat with the find to the cave entrance to rest and recuperate.

The Battle in the Temple

There was minimal resistance when the party marched past the dark pool cavern. Jairus chased one bugbear until he threw enough daggers into it to kill it. The party scouts followed the main trail in the other direction to a set of large double doors.

The doors opened into a large temple with pillars lining the hall. At the north end was a huge statue of a dwarf. In front of the statue was a camp of sorts. The party was soon joined in battle with 3 bugbears, 4 giant spiders, 2 dopplegangers (one originally in the shape of the missing Nundro), and the Black Spider himself.  Weapons rang, spells flew, and the Black Spider was the only enemy to leave the temple alive. Kell, the barbarian, chased Nezznar to the east, where he jumped in a stream at the bottom of a giant fissure and got away.

The party regrouped in the temple, with the barbarian explaining how the Black Spider got away. There was little to do but patch wounds and carry one. They still needed to find Gundrin's brother Nundro and find out about this "Forge of Spells." They headed east to a door the barbarian had passed in her chase. On the other side of the door were quarters containing a "badly disheveled dwarf." Here was Nundro.

The party passed through a collapsed cavern next, at the bottom of which was the stream that allowed the Black Spider his escape. There was a worked hallway on the southern side of the east wall and an unworked tunnel on the northern side. They chose the worked hallway first.

The Shadow Walker explored the hallway and entered a large smelter cavern. She quickly made note of the corpses in the room and the floating green-flamed skull hovering over them. When she reported back to the party, they decided to try the unworked tunnel to the north instead. 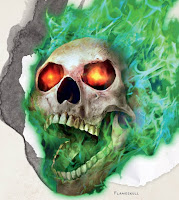 The tunnel was a short, narrow, dried up old streambed. They had to crawl through at points, but nothing took advantage of them while they were prone.

The streambed led to a booming cavern with a narrow ledge overlooking a vast expanse of water. The sound of Wave Echo Cave is made by surges of water funneling into this cavern and slamming against the wall below the ledge. At first, the party thought of exploring the body of water, but some quick observations noted that it likely extended far beyond their ability to explore. It was a wide-open expanse of water, but it was essentially a dead-end.

There were two passages leading out of the cavern on the southern end of the room. One led back to the room with the green-flamed skull. They decided to continue to avoid this room if at all possible. The other path led to a starry cavern with two rooms worked into the eastern side. One was on the level where they entered, and the other room was down a flight of stairs worked into an escarpment. They tried a door to the room near where they entered.

"Hello," said a think, burbling voice in their heads. "Would you like some tea?" The speaker was a Beholder, specifically a Spectator. The more knowledgeable in the party were scared stiff. Luckily, the Spectator was a bit insane, fully in denial, and friendly...as long as the party didn't try to take any of the items it was charged to guard. 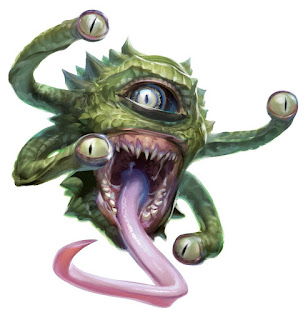 The Spectator told them it was guarding some things, and that it's master should be back any time. In reality, the master had been dead for hundreds of years. The party wasn't quite sure about that party, but they figured out after talking to the creature for a while that it didn't have a perfect grasp on reality.

They talked, and it told them they were carrying some magic items, though it couldn't identify what they were. It told them how to use the Forge of Spells, which was located in this room. The party laid some weapons and shields down on the forge long enough for them to become charged with magical energies (which would come in handy during the next sitting). The party left on good terms with the Spectator, leaving alone the items it was charged to guard. They promised to stop in for tea again next time they were in the area.