The days had been filled with light, yet incessant, rain.

The road to Sulzerberg was lined with gibbets. Tens of gibbets. Probably 100 gibbets, in all.  Beggars and Bone Pickers crowded about the "freshest" ones, scavenging what they could and discarding the rest. 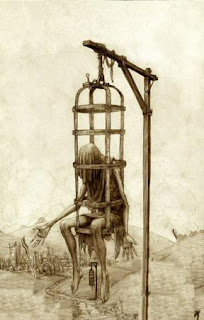 If this was all meant to intimidate, it did the job. Vaervenshyael pulled the cap covering her ears, ears which marked her as a foreigner in this land, even further down her head. She was confident in her one-on-one fighting ability, but she had no desire to take on an entire town.

From the outside, the town looked well fortified. She was glad the gates were open, though the two armored figures inspecting those entering did not look too inviting.

Tankred managed to talk the party's way through the gates, relying on his blacksmithing background to provide cover. Vaervenshyael kept her face deep in the shadows of her hooded cloak. It hid her features, as well as her scowl.

The object of their trip, the tower with the dancing cows, was visible from everywhere in the city. Still, the party chose an inn near the tower, an inn by the name of the Drunken Donkey. Interestingly enough, the script on the sign contained a fair amount of Eltharin flourish.

After Tankred checked the party in, Vaervenshyael asked the innkeeper if there were any elves about town. He offhandedly mentioned a couple, the most notable one keeping to the temple of Verena. Vaervenshyael made a mental note to visit the temple, after inspecting the tower. 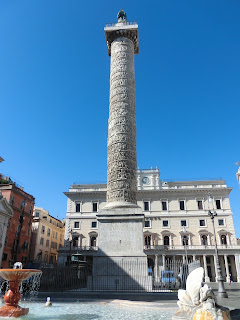 The tower/pillar/whathaveyou had seen better days. It had apparently toppled at some point and had been righted by use of large metal nails. It also had a high, iron fence around it's perimeter. From what she could see, the tower would be easy enough to scale, if the goal was access to the line of dancing cows at the top.

While she scouted the tower, Wilhelm and Johann spoke with two female knight. The two knights seemed very favorably inclined toward the men. They were open with information about recent events in the city, including an allegiance Rothilda had made with greenskins to the north.
Play RPG Vaervenshyael WarHammer