The light of Tankred's lantern and Otto's triple-wicked candle illuminated the dead end.

There were new noises coming from behind the northern door, against which a pile of foul-smelling detritus lay. The noises accompanied a scratching, muted by the thick wood of the door and waste pile. Roderick jumped back from the pile, knocking into Johann, who was pushing what looked like a rotted fruit skin—maybe?—off the surface.

"Something—don't ask me what it was—was just pulled under the door...," spat Roderick, his eyes wide, and the light shifted as Otto tilted his head to get a better look. The light jumped, the shadows danced, and Otto cursed as wax poured onto his hand.

Each of he party had pondered out loud mystery of the clear liquid of the fountain on the north wall. The wall, fountain, and sparkling water in the fountain seemed untouched by the filth of the room, seemingly fastidiously kept or magical. Roderick pondered this for a moment, whispering a prayer or catechism to Verena.

"This fountain is pure. Hysh radiates from the spigot. It may be that it anathema to the Filth Lord and his servants. Otto please be sure to sketch this with care." Roderick turned to Tankred and Wilhelm, carefully listening at the southern-most door.

"I think that whoever, or whatever, is behind this door is trying to hide their presence by speaking when we speak." Tankred announced, as Roderick had before. The voices started and stopped with a fool-like timing that ended shortly after Tankred finished. Wilhelm nodded, still listening.

"Whatever they are saying, it is a foul language," Wilhelm added, "can't understand any of it." He smiled as the speakers behind the door started and stopped. It drew a smile from Tankred and Wilhelm. As quickly as the smile appeared, Wilhelm shuddered.

"Imp. Probably a Bubo,' Otto and Roderick interrupted, almost at the same time.

"is in there." Wilhelm finished. He countenance soured just a little in the light of candle and lantern as he stepped back from the door.

Varvenshyael pushed the ramrod back into the guide beneath the barrel of her pistol, checking and satisfied by the load. Her ears were adorned with pieces of cloth stuffed into them. Wilhelm saw this and remembered that he had an idea for ear cups stuffed with goose down on a wire spring...

"Well, what's behind middle door everyone?" Varvenshyael's question snapped everyone back to the present.﻿

Not wanting to leave an enemy behind them, the party elected to open the southern-most door. Inside was one large, winged imp, with two smaller daemons. The imp raised its hands as if to ask the party to halt. "Which faction workest thou for?" The creature's question was cut short as Tankred charged. Vaervenshyael stepped into the room and fired one of her pistols. Johann charged the third daemon.

As Tankred handily dispatched of the large, winged creature, Vaervenshyael shot her second pistol again at the smaller daemon. This shot went straight through the daemon's head, dispelling it instantly. She tucked her pistols away, quickly drew her steel, and charged in to assist the doctor. The result of her charge was a second daemon dispelled, run through with her masterwork rapier. Otherworldly ectoplasm splashed her garments as she followed through her charge.

There were no other doors in this room, though the party did find a silver chest filled with ancient gold. There were now two doors to choose from in the main hallway. Vaervenshyael used the supernaturally clean fountain to wash daemon plasm off her garments as the party chose its next portal.

The middle door was opened and a lantern shined down to find a portcullis at the end of a hallway. On the other side of the portcullis was a room that Tankred recognized from their previous twists and turns underground. There was no need to pass that way, though Tankred could faintly hear the voice of one of his mercenaries calling for the heroes in the distance. It was time to quickly check the third door.

The elf nimbly stepped around the trash pile and threw the door open, causing the creature behind it to squeal in surprise. The party attacked a Hutt-ish monstrosity. 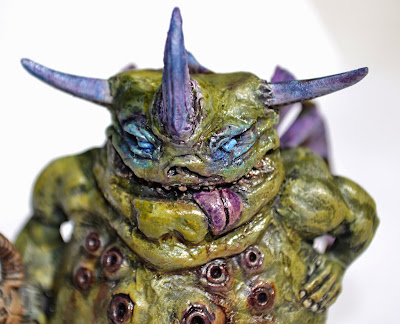 The daemon was surprisingly easy to kill. Tankred used the fountain to cleanse his sword while the party packed up to return to the surface.

Friebald met the party in the room with the statues. He reported zombies amassing from the north. Van was trying to distract the creatures away from camp until Friebald could retrieve the heroes.

The party returned above-ground in time for Friebald to complain that his feet hurt. His boots were covered in rot, and his feet were breaking out in a rash from walking through the slush of dead maggots the party had left behind. The doctor diagnosed it as Nurglish Rot.

Vaervenshyael and Tankred left the others behind, heading with weapons drawn to the spot Van Duster had led the zombies.
Play RPG Vaervenshyael WarHammer